There are a million gorgeous places in the dense winding streets of Paris, it’s impossible to name them all. It was the little pockets of my daily life in the city that made my Block Club Residency in Paris so special: the place I had coffee, the public fountain on the way to the metro, the bakery I visited every day for a sandwich, the way the cobblestone patterned in a lazy meander on my block, the way the light hit the buildings in the morning. Still, there are a few places I wouldn’t want anyone to miss, even if they are in Paris for just a weekend. Here are five of them.

Le Centquatre is a public cultural center in Paris that is housed inside the former municipal undertaker’s building in the 19th arrondissement. It’s now a massive arts center with exhibition space, on-site studios, 200 artists in residence, and a long, open hall down the center that serves as a gathering places for the community to work on projects. The building, grounds, and bookstore are reason enough to visit. I went with a friend on a quiet day to see a photography exhibition, but the best part was sitting on the sidelines watching the groups who had gathered in the main hall practicing dance numbers. The multi-disciplinary creative energy and community-focused vibe in the building are infectious and motivating.

Hardly a secret, Buttes-Chaumont is the gorgeous Belleville park I frequented for walks to marvel at the “fake Roman architecture.” It was built by Napoleon III in the 1860s at the site of, well, basically a disease-infested garbage dump (très Parisien) and emptied gypsum quarry. It features a picturesque (man-made) lake, surrounded by astonishing cliffs and rock features from the quarry with the Temple de la Sibylle, modeled after the Temple of Vesta in Tivoli, perched at the top. The first time I visited I was really blown away. In summer, it feels like you are wandering inside a painting. The views of the city are wonderful and the park is filled with beautiful people enjoying the day.

Palais de Tokyo is a contemporary art center located just across the Seine from the Eiffel Tower. (Perhaps you have heard of it?) Between the rotating exhibitions, audio-visual performances, screenings, etc., there is always something unique going on there. Palais de Tokyo is open until midnight most nights, which makes it a very appealing and rare evening museum option. And if there isn’t something to see (sometimes, the center is transitioning exhibits), there are two restaurants and an excellent bookstore. 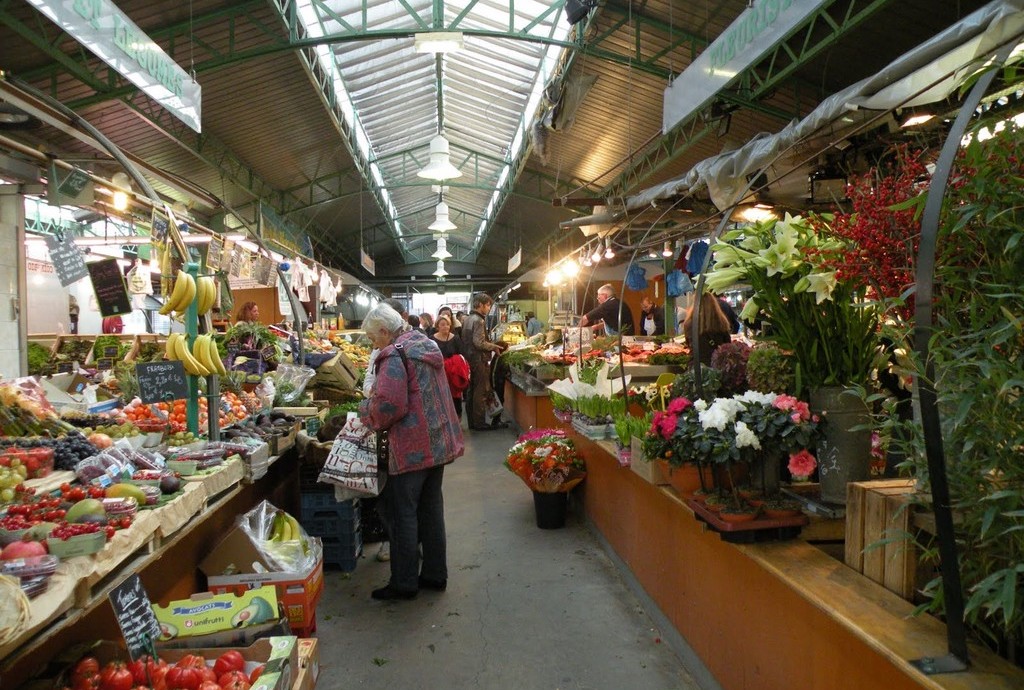 A tour of food markets is top of the list in travel for me. It is such a special feeling to fall into the crowds, moving among the stalls, watching the interactions, and enjoying wonderful food. Paris is certainly crawling with famous markets overflowing with beautiful produce, cured meats, mounds of cheeses, flowers, fish, you name it. But Marché des Enfants Rouges, the oldest covered market in Paris, is such a special place in the city. Its bustling stalls sell prepared foods of all cultures and styles in a cramped little square on the site of a former orphanage. Try to visit off-peak hours.

There isn’t a novel way for me to describe the oft-poeticized Cimetière du Père Lachaise–burial grounds to Marcel Proust, Abelard and Heloise, Oscar Wilde, and, yes, Jim Morrison. Even if you are not a grim cemetery troll like myself, Père Lachaise, like a walk along the Seine at sunset or a bottle of wine on the canal, is one of those quintessential-for-a-reason Parisian experiences. It is a beautiful refuge of calm in a loud city and the crowded, stony atmosphere in French (indeed most European) cemeteries is in such stark contrast to our expansive and green, park-like idea of the thing.