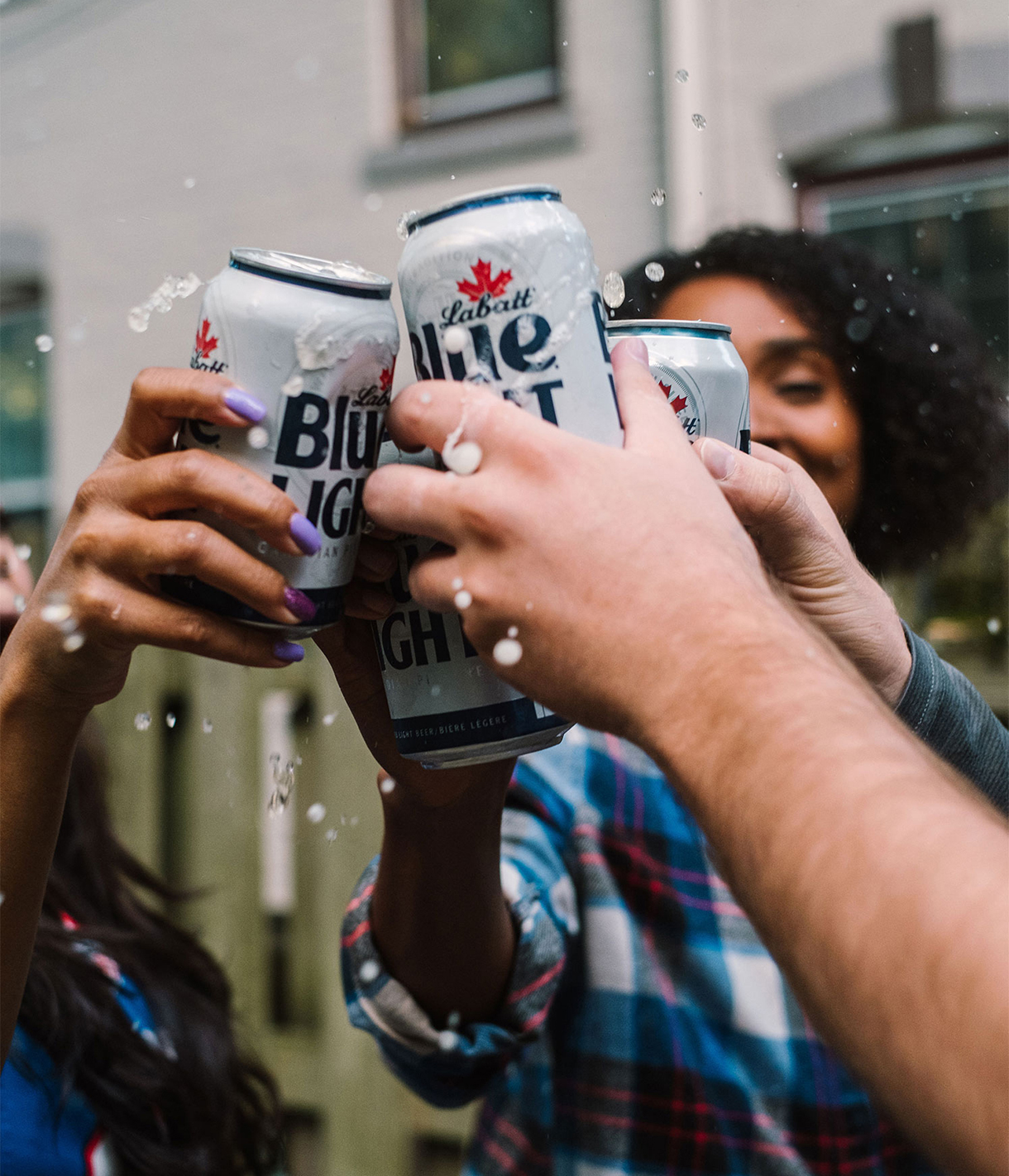 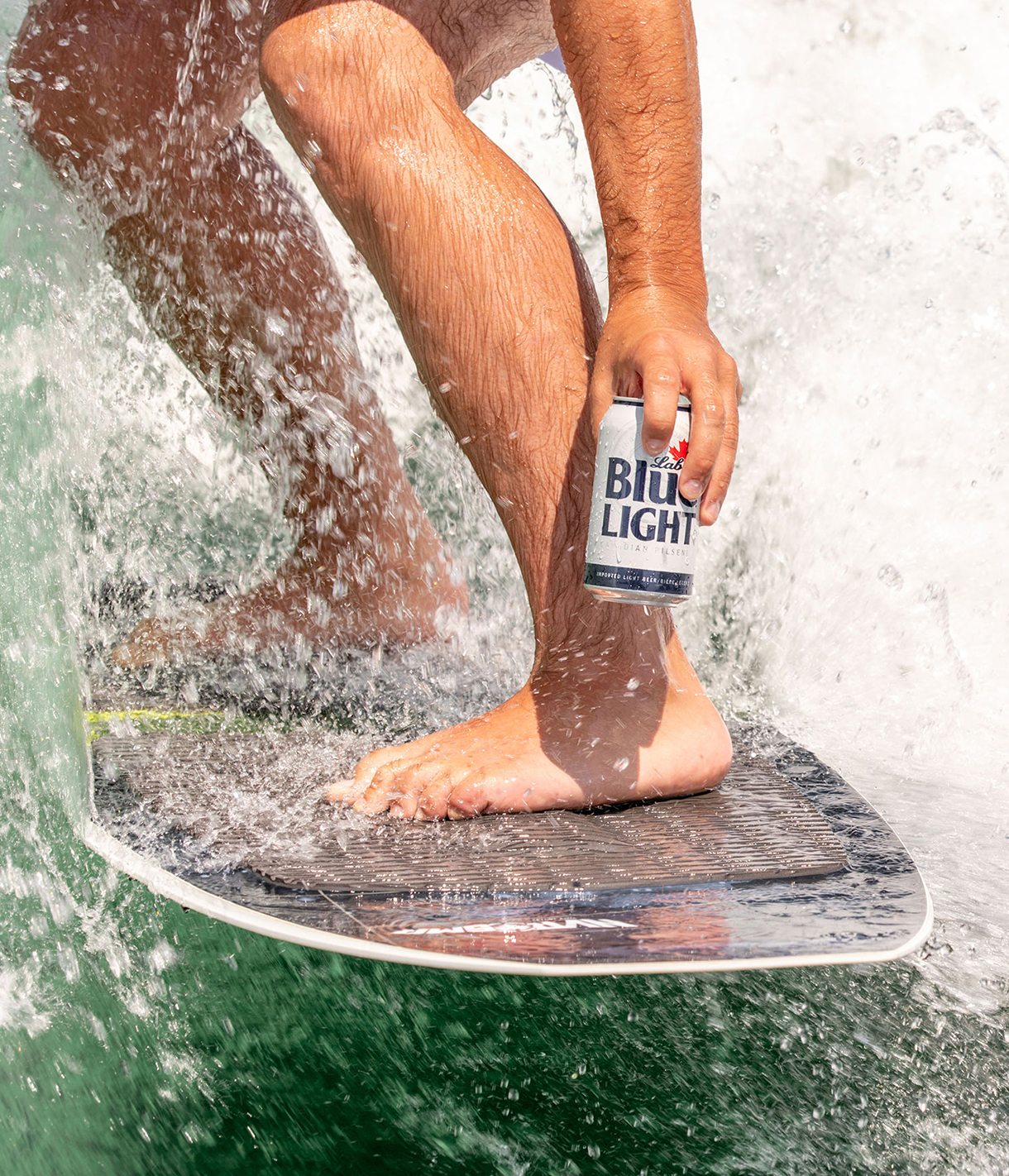 In a world where authentic, uninterrupted connectivity to consumers is key to longevity and repeat purchases, brands partner with Block Club to run their social media accounts and achieve impactful, measurable outcomes. For Labatt USA, that meant hiring Block Club to leverage social media to grow brand awareness and cultivate loyalty among a younger demographic.

As alternative alcohols like hard seltzers, canned wine, premium spirits, and bottled cocktails increasingly crowd the marketplace, consumers have developed a taste for novelty libations. With so many options, they are less likely than ever to remain loyal to any single brand or type of alcohol.

To stay competitive, Labatt had to adjust their audience strategy. That meant appealing to brand-promiscuous 21-to-30-year-olds without losing sight of their longtime fans. The goal: to drive new perceptions around Labatt and keep Labatt top of mind, so that when consumers go to make an alcohol purchase, they reach for Labatt time and time again.

Knowing this younger demographic is active across social media, Labatt hired Block Club to revive Labatt’s presence on Instagram, Facebook, and Twitter and make real connection with a new generation of Labatt drinkers.

Labatt had a social media presence, but they didn’t have the bandwidth to optimize their social media performance. They needed highly resonant social content and a community management strategy—one informed by market research, testing, and analytics—to rally diehard fans, appeal to younger drinkers, and promote Labatt products as the go-to choice for most drinking situations.

Labatt gave Block Club the keys to run their social media accounts, with a focus on driving growth and engagement strategies for Facebook, Twitter, and Instagram in support of their sales strategy. Informed by the buyer personas and value propositions Labatt developed for each of its products, we created high-energy, high-impact social content that generated excitement around Labatt products, sowing loyalty among longtime fans and new adopters alike. Simultaneously, we provided thoughtful and responsive community management to ensure Labatt was always positively engaged with its social media audience. In effect, we became an integrated part of Labatt’s formidable marketing team.

When our partnership began, we took the time to deeply understand Labatt (its products, positioning, and values) and Labatt’s target audience (how they live, think, and use social media). Our mission: to identify points of overlap so we could create content that speaks to consumers while staying true to Labatt’s identity and supportive of its business objectives. We regularly revisited both to ensure our content was always well informed, responsive to Labatt’s changing needs (e.g., the launch of a new product like Labatt Blue Citra), and meeting or exceeding performance expectations.

Each month, we developed a cohesive content plan. The content we conceptualized and executed drew from the library of product photos and videos that we continually captured for Labatt. Our designers also produced memes and animated assets to support the social campaigns we devised, which included engagement-drivers like giveaways.

Across the board, the content we created for Labatt was inspired by:

In effect, our target audience was regularly reminded that Labatt is a brand that shares and reflects its interests and values. In turn, drinking Labatt products began to take on new meaning reflective of our target audience’s identity—an important step toward cultivating lifelong brand loyalty

For example, when the Buffalo Bills (the NFL franchise in one of Labatt’s biggest markets) faced the Titans away from home, we developed and launched content, geotargeted to the Nashville region to let #Billsmafia fans in town for the game know where they could find Labatt drink specials in the area. This established a clear link between Labatt and gameday and reminded a key segment of Labatt’s target audience that Labatt cares about the same things they do. 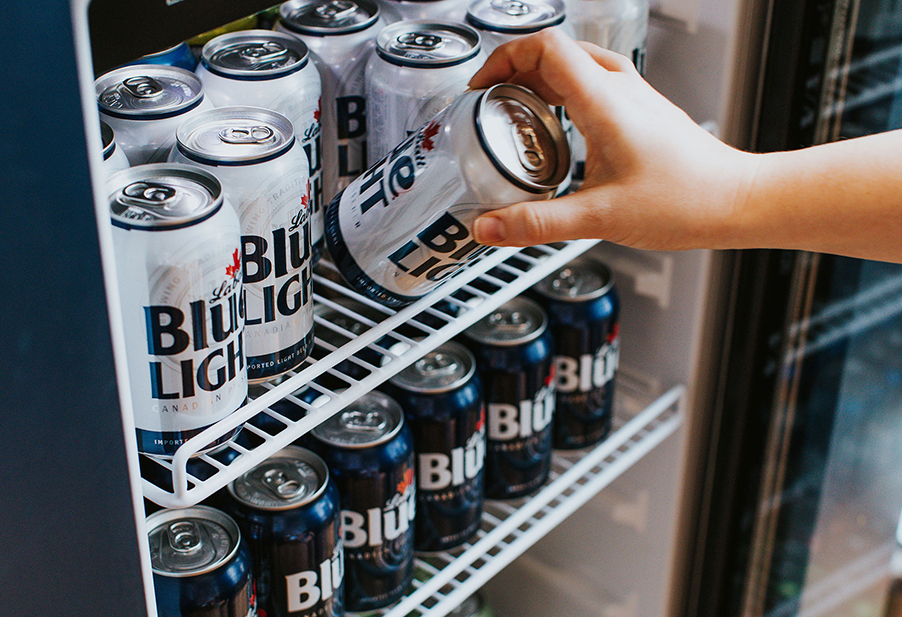 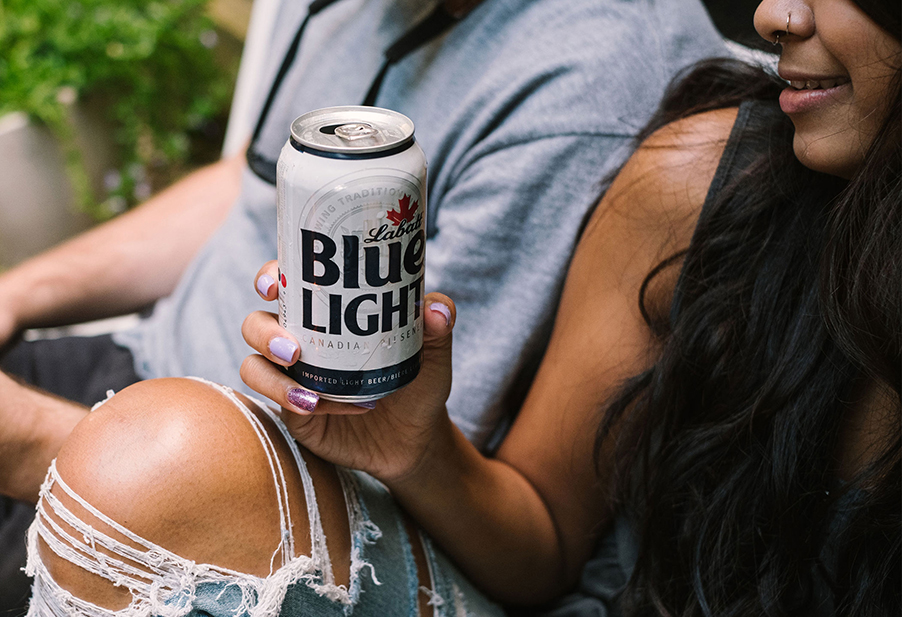 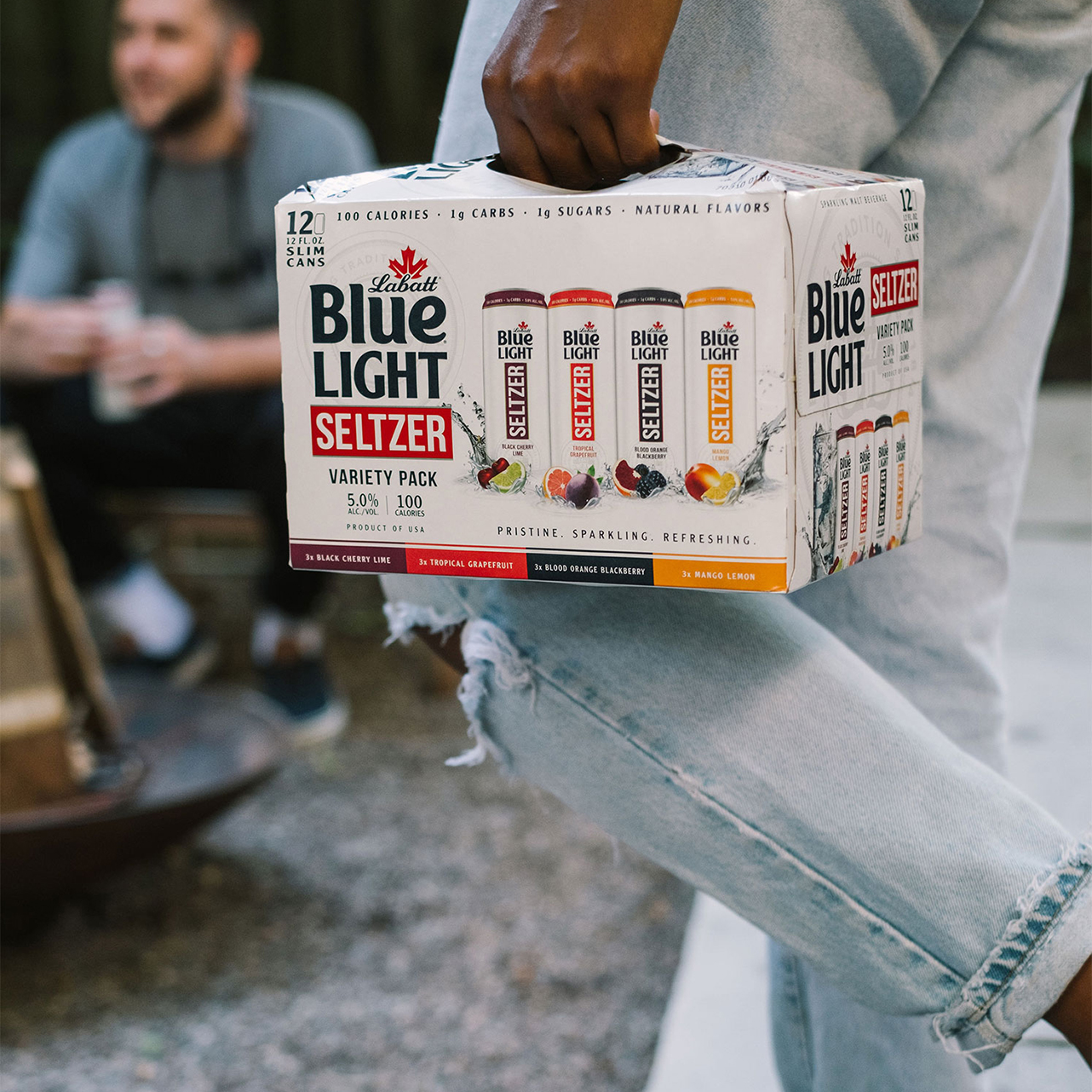 Every month, we responded to hundreds of direct messages, brand mentions, and comments across Labatt’s social channels, which we tracked on Sprout Social. In doing so, we made sure that our interactions reflected Labatt’s brand voice and personality, respected the tastes and preferences of our target audience, and supported Labatt’s sales goals. We also identified opportunities to surprise and delight our target audience by sending especially engaged and influential consumers packages with branded swag. In turn, recipients become brand advocates, sharing pictures of their swag on social media. Over two years, we shipped 250 surprise-and-delight packages. One in four resulted in tagged thank-you posts and product placements.

Being on the frontlines of Labatt’s social media gave us a firm understanding of how consumers thought, felt, and wanted to be communicated with. The information we gleaned influenced each month’s social media content plan, ensuring continuously improving outputs.

When we launched Labatt’s branded GIPHY account (a first among the company’s competitor set), we relied on our deep understanding of Labatt’s consumer to properly tag our GIFs to show up in consumers’ searches. In the first 12 months, we generated more than 21.2 million free brand impressions. At its peak, Labatt’s GIPHY account was earning up to 400,000 organic daily views

We also deployed social listening to measure consumer sentiment around Labatt products, competitors’ products, and numerous keywords and hashtags relevant to Labatt. This allowed us to monitor whether sentiment was trending positive or negative in real time, which enabled us to pivot content on a dime, if necessary, to achieve the results we were looking for. Our agility was especially evident in the immediate aftermath of the COVID-19 pandemic, which forced brands across markets and categories to reconfigure their content strategies to jibe with consumers’ rapidly changing moods and feelings. At last check, Labatt’s brand sentiment was 9% more positive than its top competitor.

Our work was also guided by social media analytics, which we reported to Labatt each month. The reports were highly customized to Labatt’s objectives and evolved to meet Labatt’s changing needs. When we noticed, for example, that a critical mass of consumers on social media were requesting Labatt products in areas where they are not available, we tailored our report to include the locations of product requests. That gave Labatt’s sales team the data they needed to advocate for product expansions.

Our partnership with Labatt was highly collaborative and deeply communicative. We meet weekly with the Labatt team to report on status and communicated daily to keep the project team informed of the latest goings-on. We also invested in seasonal brand strategy sessions to develop longer-term campaigns and content innovations in line with Labatt’s short- and long-term priorities.

Within a year and a half as Labatt’s social media agency of record, Labatt’s Instagram followers more than tripled. In turn, we were able to make @labattusa a verified account, which served to improve impressions on organic posts.

As we gained an ever deeper understanding of our target audience and how to drive reactions, engagement also rose sharply—up to 8.5%. (For comparison, Rival IQ’s benchmark for the food and beverage industry is 1.18%). In turn, average cost-per-engagement fell to $0.04.

Last year, we effectuated nearly a billion impressions for Labatt across all social media platforms—evidence that we indeed raised brand awareness and helped keep Labatt top of mind among hundreds of thousands of consumers.

These results combined with Labatt’s impressive sales growth in recent years indicate that Labatt and Block Club achieved their original objective: to use social media to insert the Labatt brand into the daily lives of their target audience.